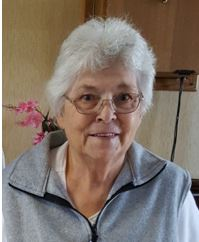 Barbara Louise Hartnett, 83, of Weiser, Idaho passed away on Tuesday, June 18, 2019 at home with her family.

Barbara was born August 19. 1935, in Lincoln, Nebraska, the daughter of Homer and Virginia Allen.  She graduated high school in Payette, Idaho in 1953 and then attended beauty school. Barbara married her sweetheart Bill Hartnett in September 1957 and moved to Weiser, Idaho.  They were happily married for over 61 years. Barbara continued to operate her beauty salon from home, while she and Bill raised three children and ran the family farm.

She is survived by her husband Bill Hartnett; a son Michael Hartnett and his wife Patti Hartnett of Weiser, Idaho; daughter Colleen Hartnett of Nampa, Idaho; daughter Maureen Hartnett of Nampa, Idaho; her sister Karan Fox of Weiser, Idaho; grandson Alex Ostrom and his wife Julie Ostrom of Bend, Oregon; granddaughter LeeAnn Anderson and her husband Russ Anderson of Boise, Idaho; granddaughter Sara Ostrom of Boise, Idaho and three great grandchildren.  Barbara was preceded in death by her parents and her sister, Mary.

Family and friends are invited to attend a Celebration of Life open house to be held on Saturday, June 29, 2019 from 1pm to 3pm at the Haas Community Hall on the Weiser Flat at 694 Jonathan Road.