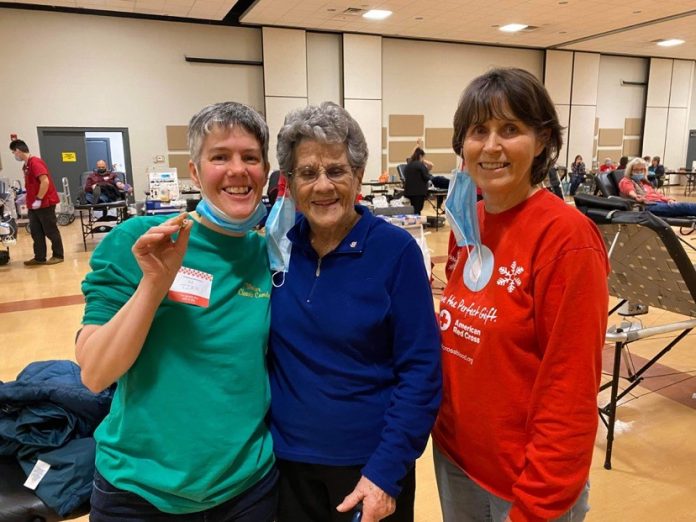 The stunning decorations from the Festival of Trees Gala were gone from the Vendome, with the exception of one exquisitely decorated Christmas tree in the corner.  Still, the room was just as beautiful, only in a different sense.  Now it was filled with blood donors, Red Cross workers and volunteers all working together to help save lives.  At this joyous time of giving, what better gift than the gift of life.

On December 8th in the Vendome Events Center, Weiser held its quarterly blood drive.  An impressive number of donors, 91, turned out.  Since keeping track starting in 2014, only once have we surpassed 91.  Last December’s drive topped the list with 98.

In a short ceremony with other donors and volunteers congratulating them, two special donors were presented pins for reaching monumental goals.

Tina Frei was awarded a 10-gallon pin representing an impressive 80 donations.  Giving blood hasn’t always been easy for Tina.  There were times she wasn’t allowed to donate due to high blood pressure or dizziness, but Tina persisted.  Three months later she would show up at the next blood draw to try again.  Through trial and error, Tina found that if she goes to the food table first and eats a sandwich, “it gives my heart a chance to slow down.”  Most people would have given up but Tina never did.

Lila Harper earned her 25-gallon pin signifying an incredible 200 donations.  To put this in perspective, I once asked professional painter Everett Pierce how many gallons of paint it takes to coat the outside of a standard size house.  On average, 25 gallons would cover two houses!

Lila has been donating blood since she was 18.  For 56 years, Lila also volunteered at every quarterly blood drive held in Weiser.  “It enriches your life when you volunteer,” Lila once told me.

The blood drive could not happen without the help of the volunteers.   Blood drive coordinator, Alex Chavarria, pulls it all together by lining up and calling donors.  Dorothy Evans works the registration table during the drive and enters future appointments into the database.  Nicki Davies helped at the registration table and Janet Forward escorted donors from the blood draw beds to the food tables.  Dolores Overacker, Patty Dickinson, Mary Walker and Jan Mullins (members of Xi Nu and Nu Master sororities) made sandwiches for the donors and a delicious lunch for the staff and volunteers.  Lunch was paid for by the Beta Sigma Phi City Council.  We are also grateful to MTE for their generous contribution that pays for supplies and WIFI.

Weiser’s next quarterly blood drive will be held in the Vendome on Wednesday, March 9, from 8:00 a.m. to 2:00 p.m.  Let’s keep this success rolling.  Please call Alex Chavarria at 208-602-7138 or Dorothy Evans at 208-549-5589 to schedule an appointment or go on the American Red Cross website to reserve your time slot.  Your blood could save a life.  There’s no better way to spend an hour of your time.