Brylee Williams Goes To The Capital 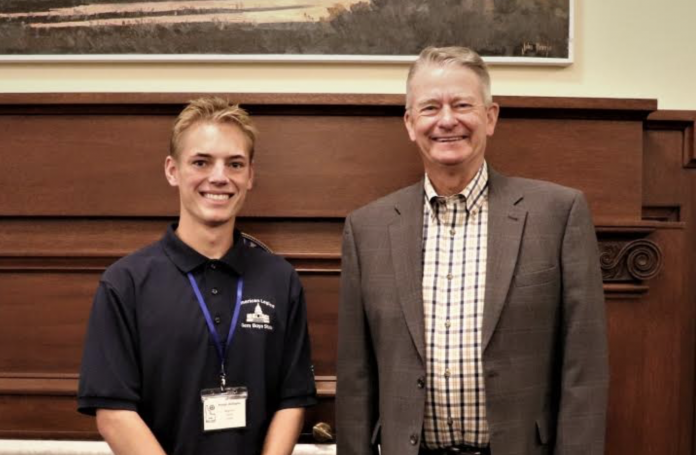 Brylee Williams shared with Living In The News .Com some of his favorite memories of Boy’s State 2021

I first became interested in attending Boys State during the beginning of my Junior year. Applying to Gem Boys State was a pretty lengthy process. In November, I applied to participate in Gem Boys State by filling out a rather lengthy application; later on, I was interviewed by the American Legion in December. I was then informed that I would be sent to Boys State. The main goal of Gem Boys State is to immerse yourself in the democracy and government of our great State. When first arriving at Boys State, we were broken up into groups of ten; these groups are what we consider our “cities.” We then ran for and carried out various offices at the city, country, and state levels. We were also broken up into political parties while at Boys State. There were two political parties, which were randomly assigned to each person, the Gold party and the Silver party. Out of the 43 boys in the Gold political party, I was elected as the Head Chairman. My job as chairman was to run our party meetings and to represent my party during the party debates. Eventually, we held primaries for state offices, in which I became the Governor nominee for the Gold party. Once again, I had to debate, head to head with the Silver party’s nominee, and give a speech in front of all the Gem Boys State delegates. Out of the 86 boys who attended Gem Boys State, I was elected as the state Governor. All in all, during my time at Gem Boys State, I was elected Mayor of my city (Newsome), Commissioner of my county (Boise), and then Governor of Gem Boys State. As Governor, my duties consisted of appointing other delegates to a variety of different positions, presiding over all meetings, proposing and supporting legislation that I deemed beneficial to the citizens, utilizing my veto powers over legislation, pardoning and recommending pardons, representing Gem Boys State, creating commissions or boards, along with performing other duties as Governor that are in lines with the goals of Gem Boys State and the United States within the limits of good taste and the Laws of the Land. I also got the amazing opportunity to meet the Governor of Idaho in his office and use the official veto stamp on some bills while at the State Capitol building. I was told that this had never happened before in the history of Gem Boys State, as the deens of Boys State were freaking out. I would be interested in a career in government; who knows, maybe at some point down the line, I will be Governor of Idaho. American politics has always interested me because it has allowed our county to become the leading power in the world. I have always liked helping people and think that politics is a great way to put this desire to work. I have done my best to act as a diplomat in the presence of altercations throughout my entire life. In today’s politics, having an open mind and hearing other people’s ideas is the best way for our country to move forward. Boys State was indeed one of the most amazing experiences of my life. I created life-long friends and got in some networking. I would tell anyone who wants to learn more about government that they need to attend Boys State or Girls State without a doubt. As I enter senior year, I have many goals in mind. I hope that my last year in the Weiser School district is one to remember. I look forward to partaking in student government and making sure that my class goes out with a bang. I’m so excited for a normal school year, but most importantly, I am so happy to spend time with all the amazing people in my life. As far as plans go for after high school and beyond, I’m not quite sure. I plan on attending college; I don’t know where yet, studying either pre-law, engineering, or biochemistry. I hope to someday, down the line, play a key role in positively impacting my community and country. Even though I don’t have all the answers right now, I hope to one day look back at these early years of my life and be proud of who I was.