Court Street Cruising for a Cause 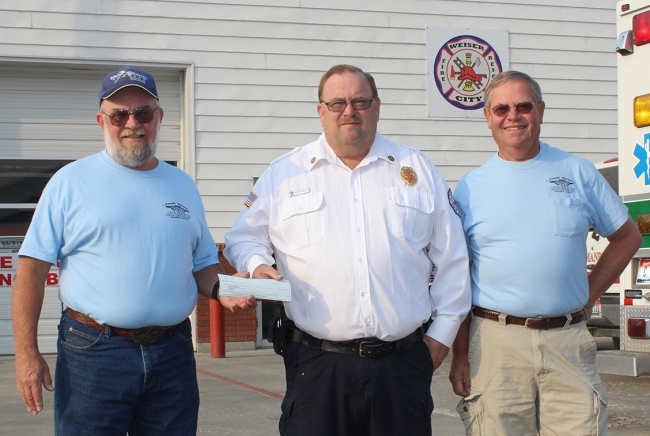 Kenny Baker and Virgil Leedy from Court Street Cruise met with Chief Kerry Nyce of Weiser City Fire and Rescue to present a check of $255 for the Fire Burn Out Fund. The Burn Out Fund provides short term assistance to families whose homes are destroyed by fire. Fire strikes suddenly. Adults and children must leave a burning home without hesitation and leave behind all material possessions. The fund helps with things like food, clothing, coats, shoes and a place to sleep, which are some of the immediate needs of fire victims.

The Court Street Cruisers are not new to donating to worthy causes, this is the 16th year

of the car show with 46 cars entering. They have donated to organizations like the Band Boosters, Snake River Heritage Center, Boy Scouts, Bleachers, The Ministerial Association and even the 4th Of July Fireworks Fund.

This year they enjoyed music from Billy and the Barn Cats, The Knights Of Columbus served up some good eats and Carlos from Legends On Main Pub N Grill served up some adult beverages.