Did They Use The Correct Oath 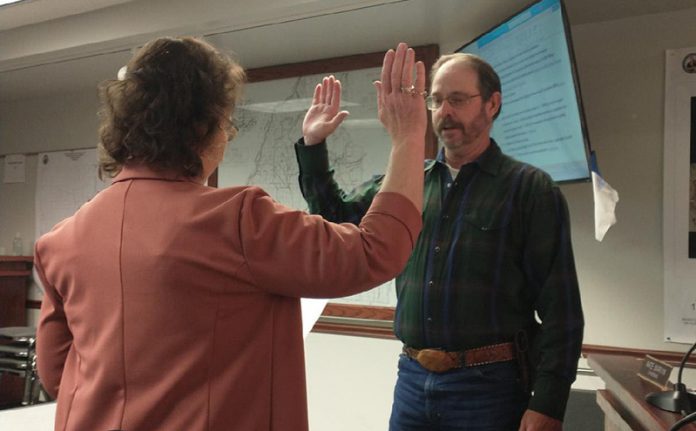 A lot has been going on in the county this last couple of weeks. Jan. 9th the newly elected county officials were sworn into office. It was the first Item of business was the swearing in of the new officials. The new commissioner, Gordon Wilkerson was sworn in along with Nate Marvin the returning commissioner. Also Donna Atwood, Sabrina Young, and Debbie Moxley-Potter, who were also reelected were sworn in for another 4 year term. Gary Jensen, the new coroner took the oath of office too. While I was listening to them it struck me strange that they were taking an oath that included supporting the Constitution of the United States, Constitution of the State of Idaho, and the State Law. I always thought that an elected official took an oath to support the Constitutions. I went home and looked it up. In State law Title 59-401 it talks about the Loyalty Oath—Form. It states in the code that before an elected officer, elected or appointed, can take office they must take and subscribe an oath, to be known as the official oath. It reads as follows, “I do solemnly swear (or affirm, as the case may be) that I will support the Constitution of the United States, and the Constitution of the State of Idaho, and that I will faithfully discharge the duties of (insert office) according to the best of my ability.”

I asked to be on the agenda of the meeting the next week during Delton Walker’s (prosecuting attorney) time to discuss this. We discussed it and Mr. Walker agreed that it was going against the code to add State law to the oath. The officers would have an opportunity to retake the oath. It was put on the agenda to adopt the oath of office. I find it interesting that they would need to vote on whether or not to follow the State Law. We will see what they do this next week. Who will retake the Official Oath?

Another issue that surprised many was the P and Z introduced an ordinance on the 9th , the first day for the new officers, to be considered and was not on the agenda. It was going to take away many of the ag exemptions that are allowed in State Code for agriculture building. The new Commissioner Gordon Wilkerson had questions about it and whether it needed a hearing first. The complete proposed ordinance can be obtained from the P and Z office. Why did they try to pass an ordinance change without the P and Z commissioners knowing anything about it?

Why didn’t Commissioner Chandler know anything about it coming forward the day he was replaced? It would have had to have been discussed in a previous meeting and was not. How come the Prosecutor had not reviewed it before being voted on? Why hadn’t the new commissioner been provided a copy before the meeting so he could be familiar with it? Who has been working on it and when? It was not in a meeting where all three commissioners were present. There are lots of questions that need to be answered. Keep an eye on this, it is important to the citizens of the County.