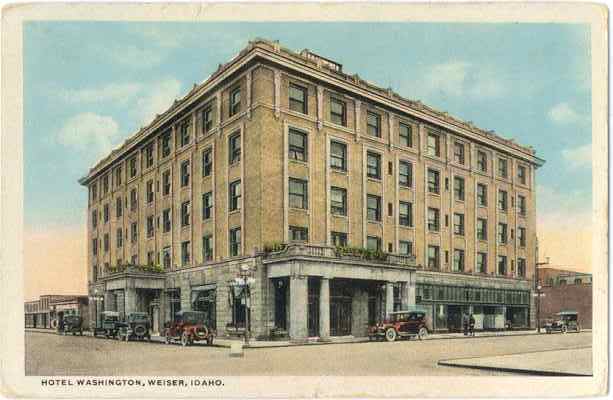 The grand Washington Hotel stood at Main and East First Street for 62 years.  Its stance came as a result of civic pride and progressive entrepreneurship.  Home capital of $200,000 was provided to build and furnish the bold community statement.

Prior to the grand opening of the new hotel, Manager M.J. Allton organized several committees for the event.  Mr. Allton was a detail-minded manager who made sure all was ready and that the evening went as planned, much to the delight of every guest.  Mrs. S.B. Varian chaired the decorating committee. It is to be noted that these ornamentations were used later in the week at another celebration in a different location in Weiser.  Receiving committee members, present at both the depot and the hotel, were directed by Mr. L.I. Purcell.  Other committees and heads included the inspecting committee, Mr. A. H. Keller; music, Mrs. J. Herbert Ricker; floor, Mr. Harry Wulf; cards and games, Mrs. George V. Nesbit.  Perhaps another reader would understand the obligations and importance of such committees as were assigned in 1911.

The Golden Rule Store bought a quarter page in the Weiser Semi-Weekly Signal promoting the Grand Opening of the Washington Hotel along with “Xmas” suggestions for the men  at “Dry Good Headquarter.”

The week of the gala, the Washington Hotel staff was busy with other proceedings scheduled for the site.  On Sunday, December 10, from 5:30 to 8 P.M. dinner was served in the dining room.  On Monday, December 11 a sale of  FURS! was advertised to be held in the “sample rooms” of the hotel until December 13, Wednesday from 9 to 9 P.M. each of the three days of the sale.  One disappointment of the week was that the bell hops’ outfits did not arrive until Wednesday, an important day late.  The uniforms, when they did arrive, sported gold trimmings on the dark blue turban-style hats, as well

as on the jackets and pants.

Whether the ladies were dressed in gold and furs or other beautiful gowns, each was amazed at the new Washington Hotel interior along with the several proceedings planned for the evening.  By 9:30 P.M. most of the guests had arrived with festivities ready to begin.  To the right of the circular desk and key racks crafted of mahogany was a “splendidly appointed ladies’ retiring room.”  A walnut-paneled billiard room was located in the west wing with hardwood paneled flooring. Terra cotta walls above the plate rail surrounding this room led to the “heavy cornice in Doric style with Tryglyphes and metropodes leading to a cream ceiling.  Such ostentatious details illustrate the expense and quality of the building.

As one wandered the first floor, marble public restrooms, a barber shop, as well as a “public stenographer’s stand” could be seen. Built-in phone booths, a news stand, and a bell hop room were also found on the ground floor along with the most impressive dining room.

After the formal program was completed about 10:30 P.M. guests were treated to a nine-course meal of the most elaborate and excellent cuisine to be served in the colonial dining room.  This room was entered to the right of the front desk.  Here

six massive fixtures indirectly illuminated the room, reflected in the highly polished hardwood floor.  Diners were surrounded by “white enameled colonial panels filled with imperial purple plush.”   Above the plate rail, a buff wall rose to a pale blue ceiling laced by white beams.  Pink and white carnations graced each table which we suppose was covered in white linen and set accordingly.  Off the dining room one would have found the thoroughly modern kitchen and bakery with the newest and best appliances available.

Guests of the gala were allowed to tour the upper floors as well during the evening.  The grand staircase of marble sidelined by mahogany rails and “brush brass balustrades” provided one means of ascent.  The other was the latest model of an Otis elevator which lifted guests to the fifth floor ballroom where official festivities began at 9:30 with the singing voices of a female sextet.

The Master of Ceremonies for the evening was Mr. Miles Canon who provided a warm welcome and introduced Mr. A.H. Keller, chairman of the board of directors of the hotel committee.  Mr. Perrault of Boise praised the local community endeavor and then relinquished the platform to Governor Hawley’s chosen representative, Mr. I.C. Hatterbaugh.  Mr. Moses Alexander and Les Falk, president of the Boise Commercial Club, complimented the Weiser people on their progressiveness while State Treasurer Allen brought the formal words of acknowledgement to a close.

Until 5 A.M. gala guests could remain in the ballroom and enjoy specially procured dance music while gliding across the finest floor with their favorite partner. The cloak and reception rooms, as well as smoking and retiring rooms were sited on the fifth floor as well. Some diners had to wait their turn as the large number of guests took turns feasting in the first floor dining room.  Others toured the other floors which were theirs for the roaming.

The second floor featured a mahogany main parlor as well as a ladies’ writing room.  Many other suites on this floor featured special woods in their décor.  All 100 guest rooms on the third and fourth floors were outside rooms with windows.  Seventy of the rooms had adjoining bathrooms each featuring a window as well.  A brass bed with the best springs and mattress available was the centerpiece of each room highlighted by Royal Wilton carpet to soften steps.  Each room included a clothes closet, other furnishings, as well as steam heat, running water and a telephone!  Imagine the luxury!

Filled to the brim with well-entertained guests and special emissaries, genial services and comfort, beautiful gowns, decorations and décor, the Washington Hotel was filled with music and sweet aromas well into the gala’s morning hours.  All the while, many grateful praises, slaps on the backs, smiles and laughter ushered in a promising era of good fortune and future for the Weiserites.