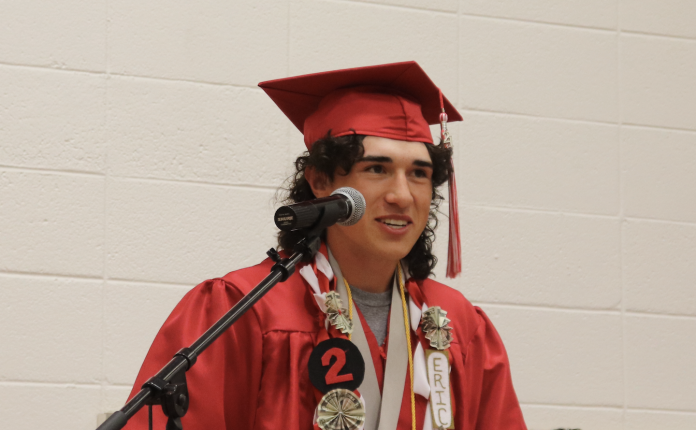 My name is Eric Torres as many of you know. First off I would like to thank Sam Kerner for telling everyone to vote for me, so I could speak in front of all of you wonderful people. Because he knows how much I love public speaking.

When I was just starting high school I didn’t know what to expect. I didn’t want to be that annoying freshman that all the upperclassmen stayed away from. So I was doing things that I thought would get me their approval. In the process of doing these things I got into my fair share of trouble, and instead of my new older friends pushing me away they actually brought me in. They taught me that making new friends is more about being yourself and creating a good atmosphere with people around you rather than trying to do stuff everyone else is doing. My freshman year was pretty enjoyable because the upperclassmen took care of me. In sports they pushed me to go harder and in some cases defended me. I remember my freshman year I was dating the wrestling coach’s cousin, but they were so close it was more of an uncle niece relationship. So he was definitely going to make me pay for it. But coach Dickerson is smart, he wasn’t going to make me do a bunch of extra work. He was just going to make everyone else on the wrestling team hate me. One time coach made me walk across everyone’s back while they did planks. It took forever because people kept falling down and we couldn’t stop until I made it all the way down without anybody falling. I thought for sure I was going to die that day. Luckily for me some of the senior kids protected me from almost inevitable death. So my freshman year was definitely one to remember.

My sophomore year for school wasn’t too special, but that doesn’t mean there was any shortage of memories made. The beginning of my sophomore year was kind of sad because all of my senior friends from the year before were all gone, but I still had everybody else. It was funny because we were all friends, there was always a competition between the grades. It was like when we have homecoming week and we do class competitions. Everybody remembers that the class above us always won the competitions, but it carried on outside of the school. We would go to the park and play basketball, and there would always be some underclassman trying to show up a senior or junior.

Junior year I came in and I was like oh yeah we’re tops dogs now. We are actually leaders in the school now. It was nice I was doing good in sports and in the classroom. What sucks is that junior year you are supposed to do your senior projects and part of that project is a job shadow. So I shadow a land surveyor and you know he’s actually putting me to work. I’m writing down precise measurements, so the construction workers know where to dig. So I got this marker and I’m writing on these stakes and I realise like 30 stakes in, I wrote all the measurements wrong. This guy I was doing this with was super nice, but you could tell he was mad because he had this half smile half im going to murder this small child in this field kind of look on his face. After that everything was fine, but I almost turned an innocent man into a murderer.

During wrestling season I made the amazing decision to grow a mullet. My girlfriend at the time hated my new haircut. She probably didn’t talk to me for about a week, but the boys loved it and the boys are forever. Sadly junior year was ruined by covid. My mom was freaking out about it and for about a month I didn’t hang out with anybody outside of work. I found a loophole though she would let me go fishing by myself, so I would say I’m going fishing and have like ten people go with me. But It definitely was the ending I thought junior year would have.

This school year started off and covid was ruining stuff for everybody. Especially for sports because we never knew if the season was going to end the next day. But it made everybody fight harder to make every second last. In first game against south payette I would say their name but the f word is not allowed in school and I should know from the freshman year lip sync. Im playing linebacker and I go up the field and this grown man in football pads is just screaming down the line and just before he ends my career the ref blows the whistle. He can smell the fear coming from my body and he just pats me on the helmet and says “don’t worry I wasn’t going to hit you that hard.” Im pretty sure my soul left my body. This year has been so much fun. I don’t think there was one night this year that no one was willing to go do something. It makes me sad that it is all coming to an end. I grew up with all of you guys and have known many of you since kindergarten. I have been so lucky to be surrounded with such amazing people who have helped me become the person I am today. All of this wouldn’t have been possible if it wasn’t for my fellow graduates and all the loving teachers and parents.

Thank you all for letting me get up here in front of guy and share some of my high school experience.