Fun to be Part of that Magic 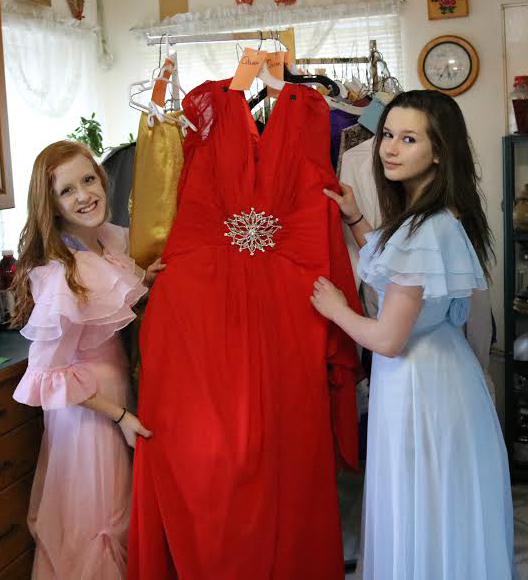 If you have ever attended a middle school or high school play here in Weiser you have seen the amazing talent of retired elementary school teacher, Julie Chandler.  Ms. Chandler has been creating costumes for the Weiser school district for years, in fact, she has been costuming for over forty-six years! That’s enough years to have not just a closet full of play accessories at her home, but costumes at the high school and in a storage shed at the bus barn.

For Ms. Chandler the love of sewing came at an early age.  She joined a 4-H club when she was in the 5th grade where she learned to sew. In her own words she took to it “like a duck takes to water”. She continued sewing in 4-H until her junior year in high school, taking top honors in sewing off and on throughout that time. In 1971 during her senior year she asked the play director if she could create the costumes for the performance and her hobby of costuming began. “I got hooked; there is just something about it, its fun.”

In college she again got the opportunity to costume for performances. “I was hunting for a job and wondered into the Kirkham Auditorium which is where the music and drama department was. I found out that they were having auditions for a play and I thought that would be fun. I will be in a play. So while I was at the audition they had us filling out the paper work about it and it asked what other interest we had and I  put down that I sewed and I thought sewing, that would be a lot more fun than being in a  play.”  Ms. Chandler found the teacher over the sewing and asked if she could help with the costumes. It happened that the teacher needed her help, but told her she would not be able to pay her this semester. Ms. Chandler volunteered her help that fall semester and by January was on the payroll. She worked on costumes for seven to eight plays a year and even helped out with dresses for her college’s ball room dancers.

Even during her teaching years she would come home after a long day of teaching elementary aged kids to work on musical costumes. If you have never been to Ms. Chandlers home during play season, it is a sight to behold. She turns her home into a costume design and fabrication studio. No room is left untouched by the play. Bedrooms become changing rooms, the dining area is where her sewing machines are set up and even the kitchen holds a stand of costumes ready for fitting.  On average Ms. Chandler volunteers 150-200 hours on smaller musicals like the Weiser Middle School’s and the Galloway play she worked on recently. High school musicals are easily 3-4 times more hours than those productions.
Currently Ms. Chandler is working on the costumes for the WHS Musical, Once Upon a Mattress. There are thirty-six cast members with four costume changes each, totaling 144 costumes for this play alone.  Luckily over the years she has had some help from family and community members too numerous to mention all by name. This year her sister Verna Christensen of Fruitland is doing all the costumes for Queen Aggravain. “I always choose a complicated lead character for her to costume. She loves it as much as I do.”  Ms. Chandler’s niece, Riata Chandler, also has been busy helping get this year’s costumes together.
Beware actors; Ms. Chandler does have a pet peeve when it comes to her costumes. After working for so many hours on all the costumes she hates to go back stage and find her hard work tossed on the floor. “I have been known to hide costumes. I go into the dressing rooms at the end of each production and I do a walk through. I will collect and hide.” She says she will then have cast members running up to her saying someone has stolen their costume. She kindly lets them know she found them on the floor. “I do give them back, but not without my lecture.”

When asked what her favorite part about costuming was Ms. Chandler with a voice filled with emotion replied, “When I see them on stage. With the hours that I put into one of these production I am so exhausted, that I am just dragging, but you sit and watch that happen in front of you and its magic.” “Every single part of a play is important. The hours and hours these kids have put into memorizing their parts are important. The hours Mike (Turner) spends on the sound and the technical and the staging all those things are important. The people who make the programs and do the ticket sales and get all that out there, all important, but until those costumes walk out on that stage, these kids do not feel that part, they’re not that person. I mean every part is important, but this is what turns them into the character their portraying. And it’s just fun to be part of that magic.” Ms. Chandler loves every part of the process; it is a creative outlet for her. Weiser school district has been blessed with such a talented seamstress volunteering her time and Ms. Chandler says, “I will do it as long as I can.”