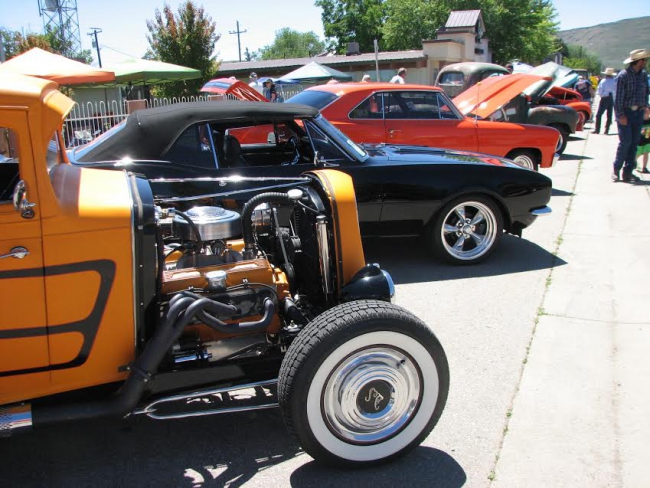 By Don Dopf
All of the elements combined Saturday to produce yet another outstanding Commercial Club Hells Canyon Days celebration. The 21st Annual Show & Shine custom car show attracted eighty-three entries this year, up by twenty-two from last year. In spite of the hot weather that pushed the temperature to 95 degrees by mid afternoon, the scenic drive from the lower country, a friendly crowd, and one of the best open-pit barbecues in the northwest helped make this year’s event another success.
Throngs of folks gathered on north Superior Street from 9:00 a.m. to 4:00 p.m. to gawk at the beautiful vehicles displayed by owners from southwest Idaho and eastern Oregon. In addition to the registered vehicles, there were several others that displayed their cars, along with a couple of beautiful motorcycles. Unregistered vehicles are not eligible for awards or door prizes but their owners are always welcome additions to the show.
Once again, vintage 50s-60s-70s music and announcing was provided by show organizer Don Dopf who loved

sitting in the shade and sharing some of over 200 songs from his collection, along with soundbites from old movies and television shows. Several cash prizes and gift certificates from Mundo Hot Springs, Loveland’s General Store, and Cambridge Litho were awarded to trivia question winners.
Sixty-three wonderful door prizes were donated by 40 generous business owners and individuals, thanks to the efforts of Laurene Houghton who works tirelessly every year to make the show even more attractive to the registrants. A big thanks is in order for all who donated. Your support is priceless and the winners of these prizes are always impressed at their value.
Judges from Nampa included Bill Horsely, Dave Bettis, and Dave Goff. These gentlemen had the huge task of picking 20 of the entries for special recognition in the form of some very nice trophy plaques designed by Cambridge Litho and produced by Kaye York and sponsored by local businesses. Two additional trophies were awarded by People’s Choice voting and Mayor Nan Rhodes. The mayor once again assisted in awarding the trophies at the conclusion of the show and her participation is always appreciated.

SS, sponsored by Jay’s Sinclair; Jack & Kathy Jones of Payette, 1969 Ford Mus- tang Mach I, sponsored by Round Up Coffee House; Dan Littlefield of Nampa, 1967 Mercury Cougar, sponsored by Classy & Fabulous Salon; Mike Rebman of Midvale, 1978 Ford F-250, sponsored by Margaret’s Cakes; Doug Hansen of Cambridge, 1970 Pontiac GTO Judge, sponsored by Loveland’s General Store; Kyle & Tana Freedman of Council, 1968 Chevy Chevelle, sponsored by Hells Canyon Adventures; Bill Pugh of Vale, 1964 Chevy Impala SS, sponsored by Jerry’s NAPA Auto Parts.
Special thanks are in order to Kermit and Rick Wiggins of Cambridge Telephone Company for once again allowing the show to anchor on the front of their beautiful building and use their electronic reader board and power supply.
Thanks also to Rita and Cyndi Bauer, and Ariel Kesler for handling the registrations, and Brian Bauer, Brad Bauer, and Kyle Freedman for staging the vehicles and keeping everything in order.
Thanks to Ernie Houghton, Brian Bauer and Kyle Freedman for helping with setup and take down. Thanks also to Mayor Rho- des, Ernie Houghton, and the City of Cambridge for their help and cooperation in blocking off the street for the Show and Shine. Thanks to Jay Reiss, Blake Loveland, Carson, Sara, Collin and Nathan Kindall, Hayden Cuta, Jerry Piper, and Bob Williams for helping out with the street cleaning Thursday evening.
A big thanks to the Cambridge Commercial Club for backing the show year after year, and to the Cambridge Rodeo Associa- tion for making their open-pit barbecue a part of the registrants benefits.
Finally, thanks to the trophy sponsors who never hesitate when asked to provide an award, and to all of those folks who do- nated door prizes.
See you all next year!!!