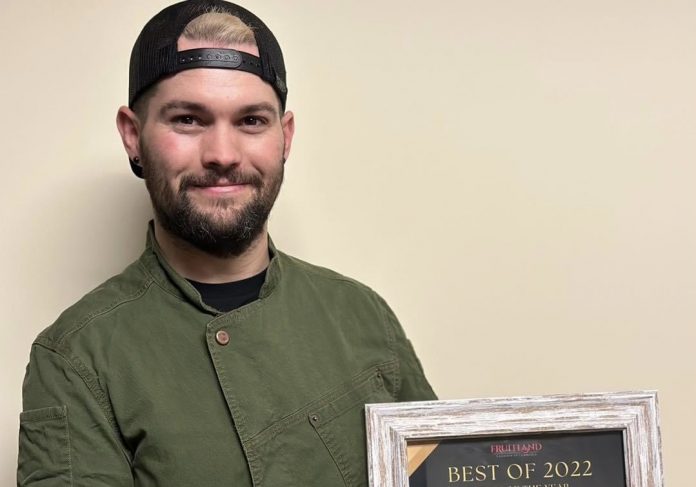 Meet Jacob Bybee Fruitland Chamber of Commerce 2022 Citizen of the year.  Bybee as a kid often came to the area to visit with his grandparents living in both Fruitland and New Plymouth. In 2016 Bybee, his wife Amy and their five children moved to New Plymouth, “My grandfather died in 2010 and we were remodeling his house. On a weekend we had come up to remodel, we were on our way back home to Lakeview and my wife said, “I feel like we are leaving home, we should move here.” Their family made arrangements and made the move.

Krista King, Fruitland Chamber of Commerce Executive Director shared why the board felt Bybee was deserving of the Citizen of the Year award, “He opened up a new business, Broken Bowl Catering and Bybee-Q Pit and ever since he opened he has been doing some really cool things. They did a free Thanksgiving Dinner. Where anyone was welcome to come and eat this really good dinner. There was no cost to anyone. He also does other events throughout the year like free cookie decorating. He’s just finding great ways to give back to his community through his cooking and his restaurant.”

Bybee shared that he has been cooking since he was fourteen years old, “I started working at a local pizza restaurant and I just fell in love with cooking. It just came naturally to me. Almost like a gambling addiction, I just got hooked. I  have been chasing this dream. I boot strapped this thing from my wife and I working over time to just doing anything I could do to make this happen. We did a lot of volunteer catering in the beginning to get our name out there.” In 2021 their business, Broken Bowl Catering, took off and in 2022 they moved their business into the corporate cafeteria at Truckstop.com in New Plymouth, Idaho. Bybee shared that after getting the space for their catering business they decided to try opening a restaurant. In May of 2022 they opened Bybee-Q Pit.

Bybee-Q Pit is located at 222 North Plymouth Ave in New Plymouth, Idaho. Bybee joked saying everyone says they are the best kept secret since their location can be challenging to find, “ We always say parking in the back. There they can see our tee-pee sign and know where we are at.” Originally the restaurant had a separate lunch menu and then offered bbq style food for the dinner hours, but starting in the next week the whole menu will be offered from open to close except the daily special that will be offered after four.

When asked about the ways he has been giving back to his community Bybee shares that  people have an easy time talking to him and he feels he really listens to them. He stated, “People need help.” Last August he realized the community could use a “pick-me-up” and so they decided to offer a free Thanksgiving dinner. Bybee also shared that he has seen that for kids in the area there isn’t a lot for them to do unless they’re involved with school extracurriculars. He wants to try and give the kids in the community more opportunities for things to do, so Bybee offered free cookie decorating, “We know there is a need. I know cookie decorating isn’t for everyone, but it’s something we could do to give back. To get kids in our community doing something. We eventually would like to expand it into cooking classes.” Bybee said he was shocked to receive this award. He was aware he had been nominated for New Business of The Year, but had no idea he would receive Citizen of the Year,“That blew my mind,” stated Bybee. Bybee and his wife plan to continue finding ways they can help in their community stating, “We just want to give back to our community, to help build them up.” Bybee continued saying, “I have just begun. There’s nothing going to stop me.”