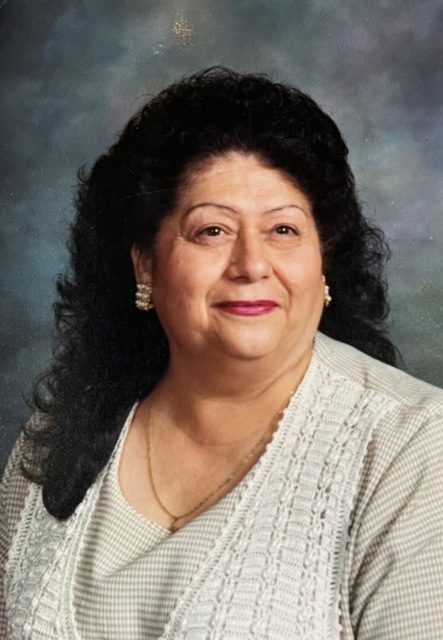 Juanita Guerrero Coronado, 79, passed away peacefully in Weiser, ID on September 9, 2022 with her family by her side. She was born on February 5, 1943 in Harlingen,TX to Olivia and Santiago Guerrero and was the third oldest of seven children.In the 1960’s, Juanita, with her three children Frank, Edward, and Martin, moved to Weiser, ID where she worked in labor camps. There, she met Jesus Gloria and his five kids (Rosa, Santos, Chuy, Ricardo, and Maggie). They got married in 1968 and had three more children (Maria, Rudy, and Jesse). After many years of hard work, they were able to buy their dream home on the Oregon Slope where they raised their 11 children and tended to many farm animals and their
large garden.

Juanita was a loving soul who dedicated her life to raising her kids. As a homemaker, she took great pride in making her children clothes, cooking homemade meals, and tending to their farm.In 2003, she remarried Nicholas Coronado in Elgin, OR. He was the love of her life and taught her how to drive a car at the young age of 60. They lived happily for three years until his death.

Juanita had a larger-than-life personality. Her family will remember her as strong-willed, ornery,and witty. Even more than her children was her love for her grandchildren. Her grandchildren will always remember their “Nana” having a voice so loud it could wake the dead. On their birthdays, they could always count on her being one of the first ones to call and serenading them with her amplified rendition of the “Happy Birthday” song. She is preceded in death by her parents Olivia and Santiago Guerrero, her siblings Audelia,Hilda, Santiago Jr., Luis; her first husband Jesus Gloria; her second husband Nicholas Coronado,
and her son Martin Guerrero. She is survived by her children Rosa (Gerardo) Nabarrete, Santos(Hilario) Mandujano, Jesus Gloria, Ricardo (Susan) Gloria, Maggie (Richard) Pizana, Frank Carrales, Edward Guerrero, Maria (Gilberto) Rodriguez, Rudy (Elaine) Gloria, Jesse (Jodi) Gloria, her 38 grandchildren, and 15 great-grandchildren. She will be greatly missed and not
easily forgotten.

A graveside ceremony will be held at Hillcrest Cemetery on Saturday, October 8, 2022 at 2 pm.A reception will follow at the home of Maria and Gilberto Rodriguez, at 1369 Ross Road in
Weiser, ID.