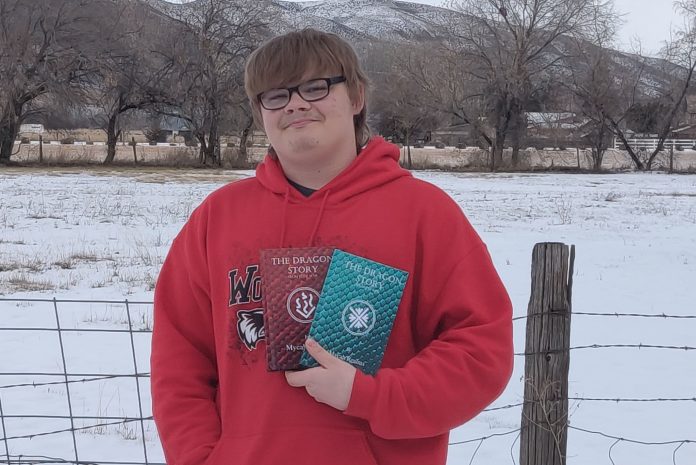 Originally from Washington, Austyn Perkins recently moved to Weiser with his parents and two younger siblings.  Now a 16-year-old Junior at Weiser High School, Perkins comes from a Christian family who values quality time together and creating infinite amounts of humor.  With the encouragement of his family, Perkins has become a published author, recently releasing his second book in a series he has been working on since he was fourteen years old.

“The Dragon Story:  Coldest of Days” was published on December 21st, 2020 as the second book in the series, right after “The Dragon Story:  Secrets of War.”  Creative writing has been a passion of his for years, and after being inspired by “Wings of Fire” series by Tui T. Sutherland, Perkins decided to delve into his own fun writing style and see what would become of his favorite mystical creature.

Perkins shared a brief description of the dragon series, “A group of teenager dragons, Glowfire, Iceflurry, Firespark, and Jewel, must somehow go from being a student at high school to being the heroes of Drath. The evil Queen Darkness is secretly creating wars and it’s spreading all over the world. The kingdoms are ripping each other apart from the wars, and it may be up to Jewel’s group to stop Darkness from being the supreme ruler of the world.”  Currently, Perkins is working on the third book in The Dragon Story series.  There is a provisional plan of making it a five-part series, but he says that could change in the future.

The series is written under the pseudonym Mycah Realms.  When asked how and why he decided to write under a pen name, Perkins shared that the credit goes to his dad for coming up with the pseudonym.  He wanted something original and memorable since there are already authors with his name.  “What about Mycah Realms?” his dad said.  Mycah is his middle name and dad said his books are like a realm to his unique creativity.

Perkins is also a skilled comic artist, originally inspired by reading comics online.  With more help from dad, he suggested creating something from a vampire penguin.  Dragons are not his only love!  You guessed it, Perkins loves penguins, too.  “Pen & Guin Comics” was born!  He then invested his time in bringing to life the first vampire penguin named Guin and the Christmas-lover penguin named Pen.  A description of Pen & Guin Comics: “A comic series about two brother penguins named Pen and Guin that go through life with their friends, comedy and random pop-up quests.” Perkins shared that his comics can be found easily with a google search of “Pen & Guin Comics”.  Comics are published as Austyn Perkins TCA.

Perkins boasted about his good friend and librarian, Sara Livingston in Washington, who has helped him along the way.  “She has been a big help in the journey of writing my books,” he shared.  Livingston assisted with story development, expanding ideas and details, and editing in preparation for publishing.

When asked what he enjoys about writing, Perkins replied, “I enjoy writing because it’s making a story that’s not yet been told. Something about writing my own story makes me feel like I accomplished something and told the world that there is a new story. It is especially enjoyable to write when I’m writing about dragons in a dragon world. What’s more fun to write about than dragons?”  It has been exciting for Perkins to publish his writing and produce material that is considered easy for teens to read.  The biggest challenge has been getting his works noticed among the public.  It is his hope that he can get his books into the hands of many people so they can experience the fun and hard work he has put into the project thus far.

Perkins is unsure of what the future holds beyond high school, as he is still a Junior, but in the near future he hopes to branch out a little bit with his writing by creating a few novellas, or short stories, based on The Dragon Story series.  He would also like to focus on finishing the Dragon story series before moving on to anything else.  Perkins has self-published his works and they can be found in digital format, paperback through Amazon, e-book and hardback through various websites like Walmart and Barnes & Noble.

So how can the community help his talented young man?  Spread the word about his new publication and the series!  Share this article, purchase and read the book, recommend them to a friend!  Access more information on his website:  www.mycahrealms.com