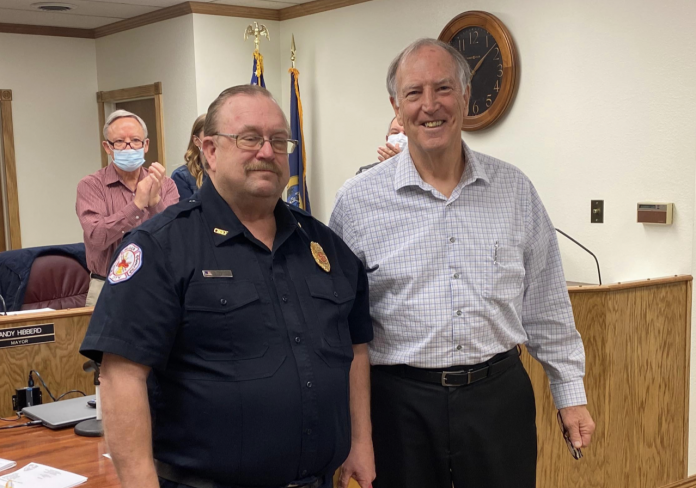 It was a packed house at this month’s Weiser City Council meeting. So packed, that I ended up in what I am referring to as “The Penalty Box”. The meeting was packed, not for the riveting agenda, but for what was not on the agenda.

In attendance were many members of our local Boy Scouts pack. They were there to earn a merit badge by learning the workings of our local government. Also, in attendance were most of the Weiser City and Weiser Rural firefighters to witness the honoring of the City Fire Chief Kerry Nyce by Mayor Hibberd ahead of the Chief’s retirement this Friday. Mayor Hibberd also issued a commendation to Police Chief Carl Smith for his and his Officers part in Weiser receiving the distinction of Safest City in Idaho and tying with four other cities for Safest Small Town in America. Way to go Weiser!

There were no commission or committee reports presented. City Clerk David Tate gave a City Department report, there was no Unfinished Business and three New Business items.

The first New Business item was Fry Foods 2022 Industrial Discharge Permit. This appears to have more moving parts then I’m able to describe, but apparently there are more questions than answers regarding the permit and it is going back to committee for further discussion.

The next two New Business items had to do with our City Water Department. The Water Department had budgeted this year to purchase a new F-250 4WD truck. The department stated that the current truck is a 2003 F-150 2WD with more than 150K miles and is incurring increasing large repair bills. The department also stated that truck is used for hauling, towing, and accessing facilities which especially in the Winter is difficult with the current vehicle. The new truck is being purchased at a bargain price and undeniably necessary. The Council Members that were present unanimously approved this purchase.

The second item presented by the Water Department was for purchase of a Sodium Hpyochlorite Tank. It was stated that the water treatment plant has two such tanks. One was replaced last year, and it was budged this year to replace the other. The tank to be replaced is 20 years old and it was mentioned that these 20-year life span which is right in line with this purchase. The Council Members that were present unanimously approved this purchase.

Layna Hafer was absent from the meeting and Mike Hopkins attended via speaker phone.

In total, the meeting lasted less than an hour.

In other happenings, The City of Weiser Website now has several years of our city budget posted as well as the October 2021 City Council Meeting Minutes. That’s progress.