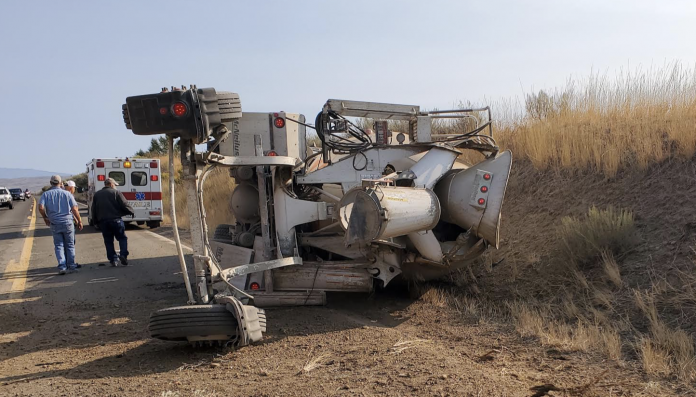 On the Tuesday (8/24/21 at Approximately 9:20 AM) Washington County Sheriff’s Office and Midvale Fire and Ambulance was notified of a truck accident (Semi Cement truck) north of Midvale. Midvale Fire and Ambulance were first on scene and had the scene and driver secured. The driver had only minor injuries and was not transported. The tractor was on it’s side in the north bound lane blocking it. Midvale Fire had traffic control set up moving both north and south bound traffic through the south bound lane. Woody’s towing arrived on scene to remove the vehicle with the assistance of some Knife River personnel. It was determined that this was going to be an extended recovery effort so Idaho Transportation Department was notified and advised of the incident and also requested some help for traffic control. Knife River eventually took over traffic duties with their own crew and Midvale Fire was relieved and cleared the scene. A witness stated that he had followed this truck from Weiser and he was all over the road. He also stated that he was unable to maintain his lane and was sure he was going to cause an accident. The driver was cited for Failure to Maintain Lane Idaho code 49-637 (1). The scene was cleared at approximately 3:42 PM.

Deputy on scene was Sam Edwards.