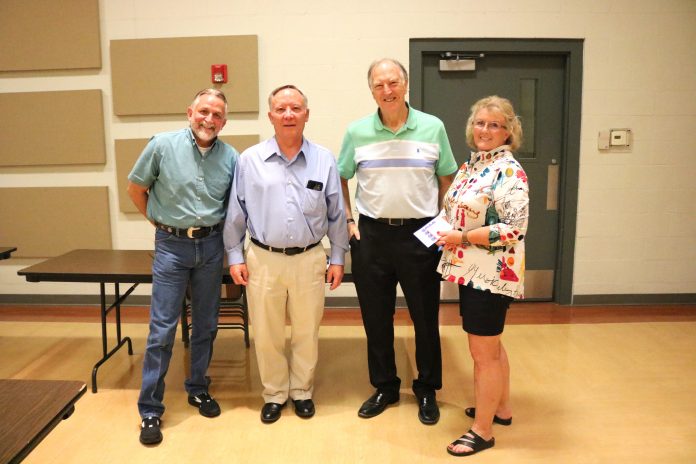 Thursday, September 15th the City of Weiser held an Open House for the City of Weiser’s Comprehensive Plan. The purpose was to help the city to set up goals for where the citizens of Weiser would like to see the city go in the future. Mayor Randy Hibberd shared that they hoped through this event they would be able to get the peoples input on different types of areas that affect the city and its growth such as, Population, Land Use, Housing and Property Rights, Recreation and Open Space, Economic Vitality, Transportation, and Public Services.

“At this point I am wanting to find out what people want. I don’t want to impose my ideas on people. Yes, there are some things I would like to see, but I’ll hold back on that until I see what the people want. I want people to feel free to offer their suggestions without basing it on what I would say.”

Aaron Mondada from Agnew::Beck Consulting shared, “The Comprehensive plan is the broad mission of the community over the next ten, fifteen, to twenty years. At this point in the  process we have heard from members of the public, the commission, the city council and a small advisory group. We feel confident in saying of the required elements of the Local Land Use and Planning Act these are some of the directions Weiser wants to go.”

Information was given of the vision and priorities of the project. These were an accumulation and summary of what Agnew::Beck Consulting heard from the above mentioned groups. What was being asked of the community was to come down and identify whether or not they agreed with priorities and if they felt they were the right direction for the City of Weiser. Citizens were able to place sticker dots on areas they felt were a priority and then make comments on sticky notes of their opinions or concerns. Each station went over one to four elements of the Comprehensive Plan that is required by the State of Idaho.

For example, one station was Population, Land Use, Housing and Property Rights. About the stations Mondada stated,“These are just the high level  goals that the city moving forward would want to support. So if we think about housing, how would the city want to view and frame housing development over the next ten to fifteen years? Do they want to increase development? Do they want to ensure large lot sizes are preserved to keep the rural community character? What we are asking is, is this the right direction? Are these the correct broad stroke focus areas for these important topics in the community? There are some implementation projects on each poster that show specific things the city can be doing to help achieve these goals.” Time frames were given for these goals based on the size of the project. Mondada continued stating, “We are looking for suggestions for additional projects and actions.” He also shared that they were looking for community members to share if they didn’t agree with parts of the plan as well as general feedback.

Agnew::Beck Consulting will take the feedback they received from this event and revise the plan. That plan will be published as a draft for community review some time later this year. The hope is to have it published as a PDF on the City’s website along with a four or five question survey where citizens can ask questions and give suggestions. Then the plan will go to the City Council for approval. Mondada commented, “We think Weiser is a really great place. It has a lot of character, assets and strengths and we want to support the development of the community in a way that preserves what people love about Weiser, but also provides opportunities for growth that supports the goals we have set. We want to help Wesier become more vibrant and active.”