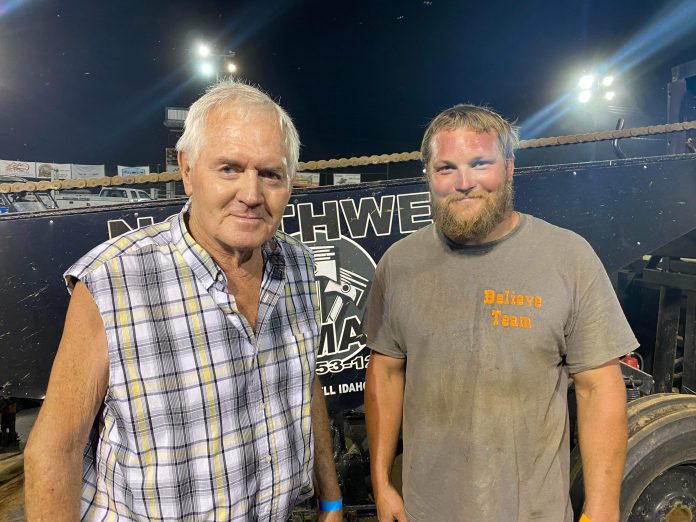 On July 15th and 16th, at the Weiser fair grounds, the famous Tractor and Truck pull returns after 40 years! At The Truck & Tractor event, the truck and tractor are hooked on to a sled and as they merge down the track the weight of the box moves forward to stop them. The objective is to get to the 300 foot mark, and to get the longest pull! Winners receive top dollar and prizes.

Dick Lee saw a truck and tractor pull event and how a sled was built in Florida in the 1970’s. Once he arrived home, he built a sled himself that would work to pull pickups and farm tractors. Dick took his pull to the local fairgrounds in Ontario in the 70’s. People became interested and involved after Dick built two more sleds. One sled to pull more horsepower pickup and to pull large blown tractors. The other sled was smaller to pull mini built tractors. Over the years, the pullers became known as The Treasure Valley Pullers Association! The group put together a pull event located in Weiser during an Old Time Fiddlers Contest. The interest grew for more pullers to pull in their areas. Dick Lee not only had the sleds, but also ran several pullers too. Dick is also known as “The General Lee ”. This is the name of his two-engine drive truck named, Eeyore, that he and his eldest son Jason drove. Dick has also traveled to many states including; Canada and Alaska pulling them! This sport is also many family generations long.

The Petero family came together and bought a Truck & Tractor pulling sled in Ohio. This became their event for the entire family to be apart of. The Petero family has been pulling for 8 years and have recently been in motorsports since the early 80s with their father starting in the stock car racing. The stock car racing started on the West Coast. Overtime, the Petero family has been involved in demo derbies and truck pulling. Jake Petero himself graduated from WHS in 2011. Matt Petero graduated in 2013 and his wife Kaeyla graduated in 2013 and is currently a third grade teacher in Weiser.

Dick Lee and his wife Linda, live in The Oregon Slope between Weiser and Ontario. Dick has lived in this area for 80 years and still has existing family in The Oregon Slope. Dick has been a farmer his entire lifetime, and he also does lots of custom digging, custom spraying, and lots of shop work! The Lee family have 3 daughters, 2 sons, with 13 grandchildren and one great granddaughter!

Truck & Tractor Pulling will continue for next year, 2023!Laser leveling will be done by Woodys Towing and Petero Performance. The Believe Pulling Team Organization will host the event. Weiser hopes to bring more people to this event next summer and hope to see you there!