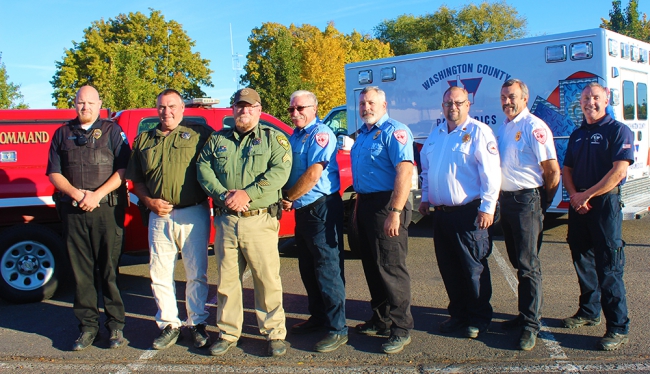 Washington County and the City of Weiser is a unique entity amongst its peers. Nestled in a reclusive stretch of the Treasure valley it is not a common sight on state or national maps. And nevertheless, Weiser stands out as a bastion of service and good will in these fifty states. Today, Living in the News has the honor of announcing the recipient of the Outstanding Civil Servant Award, and it should come as no surprise that this year’s honored winner is not just a lone individual, but

rather the entirety of the Washington County and City of Weiser First Responders located here in Weiser.

This year, the Outstanding Civil Servant Award was given to a collective for a very simple reason. The cooperation and dedication of Weiser’s assorted emergency services has allowed them to react to and solve dangerous situations with the efficiency and timeliness of a unified body. When faced with a potentially hazardous situation, all members of the Washington County and City of Weiser Emergency services are at the ready to ensure that no harm befalls our citizens. It is a system of cooperation designed to provide the maximum help in

the minimum amount of time and Weiser is safer for it. That chain of operations usually begins at the Washington County 911, where men and women are constantly standing by to receive the cries for help that lead to Weiser’s emergency services being mobilized. In order to better understand and relay the information they’re given,

these dispatchers work with top-notch technical equipment, with improvements being made all the time. Soon the people of Weiser can even be comforted in knowing that their emergency services can be reached via text-message in circumstances where a phone call might not be a viable option.
From Dispatch the wheels

of the highly efficient emergency services machine begin to turn. Weiser’s city and Washington County Sheriff’s Department are often the first to arrive at the scene of an incident and as a result the burden of assessment often falls to them. While a rapid response is obviously beneficial, officers must first be able to confirm that further harm won’t befall themselves or those

their attempting to aid when moving on a location. The threat of violence from those present or even hazards such as difficult terrain can all effect how emergency services approach a situation. However, once the threats have been weighed and accounted for, the combined forces of the Law Enforcement, Fire Service, and Emergency Medical Service are quick to secure the location in question.
The Fire Service truly shines during the rescue, as their varied

professional training regimen prepares them for rescue procedures in a variety of environments and situations. Weiser City and Rural Fire is specially trained in a variety of rope based rescue techniques as well as ice and wilderness rescues,

but on top of their specialized training the men and women of the Weiser City & Rural Fire Service are prepared to help citizens in a wide variety of situations due to the flexible nature of their generic training programs.
Once the potential victim has been removed from immediate harm the services of the Law Enforcement and Fire Service give way to the expertise of the Ambulance crew and other medical professionals. The ambulance crew has the tools and expertise to safely escort potential victims to the controlled environment of Weiser Hospital where they can receive proper care.

This is where the actions of all departments come to a head,

as a lost minute or two at any stage can mean the difference between a miracle and a disaster in many of these cases. However the rigorous attention to detail and unending cooperation of each of these departments results in stellar response time and many more miracles than tragedies on the books.
The Weiser Chamber of Commerce has chosen to honor these individuals because the consistent and outstanding service they provide has resulted in a better quality of life for the people of Weiser and Washington County. More people are alive today because of the work they do and that kind of service is hard to express appreciation for in just a few words. However, despite the hard work and personal strain many of our servicemen and women endure, many see their service as its own reward. Throughout

the departments a similar message rang out, the servicemen and women who work hard, and bear their burdens, and sometimes pay the ultimate price to keep our community safe do so because they love it. Some expressed that they could be making more money, with more resources and a larger staff, by transferring to communities like Boise or Caldwell, but they stay because they love the support and feel of the Weiser community.
By providing the services they do to keep us safe, they preserve a community and way of life that they hold dear in the process. The citizens of Weiser Idaho are lucky to have Emergency Services that are not only dedicated to the job they perform, but also to the community that they perform it in and that is why the First Responders of Weiser Idaho are this year’s recipients of the Outstanding Civil Servant Award.