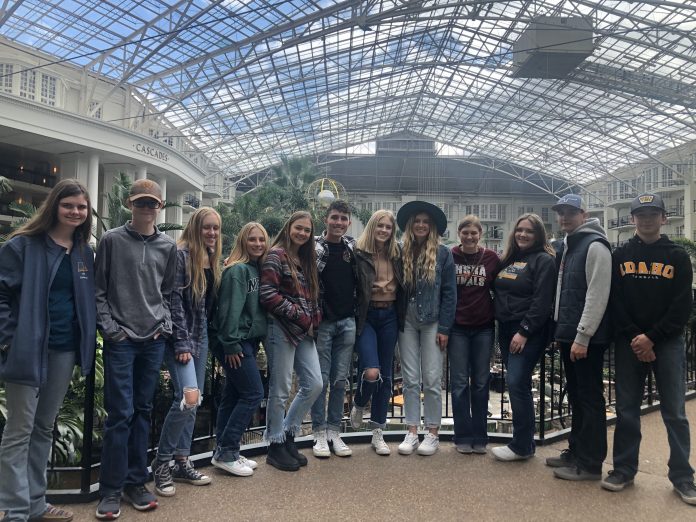 At the end of October, Weier FFA travelled to the 94th National FFA Convention and
Expo in Indianapolis, Indiana. Although some students go to compete in the events that they qualified in, we went for the leadership experience. On our team of fourteen we had two advisors, four sophomores, five juniors and three seniors. Seven of which are chapter officers. Starting our trip we flew into the great city of Nashville, where we were able to visit the Country Music Hall of Fame, see the neon lights and listen to live music, and stop by Gaylord Opryland to see the huge indoor botanical gardens.

The next day we headed north to Indiana and stopped in Louisville where we were able to tour Churchill Downs and the Louisville factory. A bonus to our trip was seeing all the fall colors on the trees as we travelled to Indianapolis. The convention kicked off with a concert put on by Brett Young. The following morning we went to the opening session along with fifty thousand other FFA members. We listened to keynote speaker Courtney DeHoff and later joined a few workshops. For example some of our team members attended a workshop called “Know your Worth”. There they participated in activities on a team full of kids from all over the country to boost their confidence and keep a healthy mind set. As we walked around the convention we played a game of eye-spy, seeing how many states we could spot in the sea of blue jackets.

Another thing that was offered for us was the college and career expo that was packed full of representatives from college and businesses that represent the agriculture industry from across the nation. We were given the opportunity to talk to these schools/businesses and see what we were interested in and to learn more about the agriculture industry. Also in the convention center was a place for students to shop small businesses and go to the National FFA Mega store. FFA is a national organization that brings kids together through teamwork, leadership and friendship. It is a place where everyone can feel accepted because it is not only for the future
farmers of America but for everyone. The first National FFA Leadership convention was held in Kansas City, 1928. Since then it was moved to Louisville then to Indianapolis where it will be until 2033.

We are very thankful to the members of the community that made this trip possible and to our amazing advisors for taking us to this convention that was packed full of education, experiences and fun filled memories to last a lifetime.