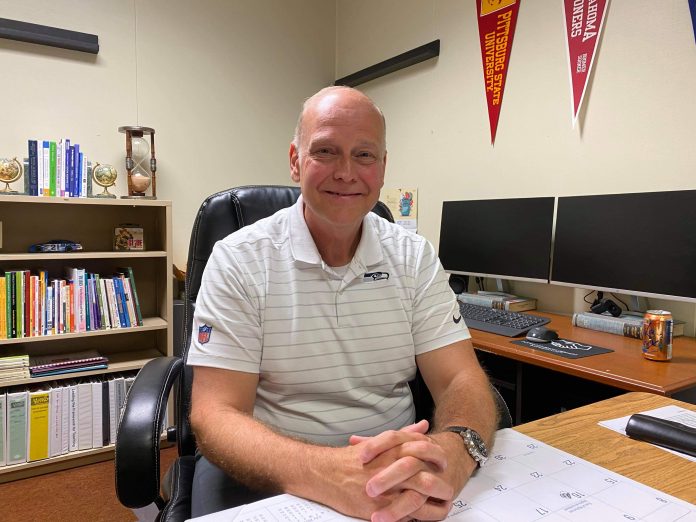 Weiser School District welcomes a new principal, Kenneth Dewlen, to the Weiser Middle School.  With a Masters of Education and extensive experience in the military as a leader and mentor, Mr. Dewlen is thrilled with the opportunity to impact students in our district as the new principal.

Dewlen began his career by enlisting in the United States Army back in 1989 where he worked his way through the ranks over 11 years.  From 2001 to 2014, Dewlen continued his military career with the United States Air Force where he stayed for 14 years and then retired as Lt. Colonel after 25 years of military service for his country.  “I loved being a commander, teaching and mentoring people around me,” he shared.  Dewlen commented that he was based out of Mountain Home for many years and loved the area, hoping to make Idaho his permanent home.

Through the University of Idaho, in 2019, Dewlen completed the requirements for a Master of Education Degree with an emphasis on educational leadership.  He is also certified as a K-12 School Administrator.  With a well-rounded set of skills and assets, along with years of military service and leadership, Dewlen brings a unique personality to the school district that will be an asset to students and staff.

He has spent an additional five years teaching in the classroom at various positions.  He taught in Utah as an ROTC instructor, numerous sub positions in business courses, and recently has been working at Sawtooth Middle School in Meridian, ID as a Career and Technical Education Instructor.  As a three-time commander in his career, Dewlen is confident that this next phase of his career will allow him to build upon the skills and training he has acquired over 25 + years as a leader, mentor, and teacher.

Dewlen explained that he has been coming to the Weiser Middle School since the latter part of May 2021 to get a feel for the atmosphere, get to know the staff, and start to build a rapport among everyone.  He most looks forward to adding to the morale that has been established by retired principal Tim Erhard.  Dewlen is looking forward to connecting with students when the school year begins.  “I love to lead, love to interact with people, and I plan to help serve as more than just a leader but also help serve as a teacher and mentor to the students,” he shared.

With COVID-19 still lingering, Dewlen explained that he is focused on the safety and security of the students and staff.  He strives to be a great leader who will watch and learn from others while he identifies where positive change would be most beneficial.  He is looking forward to making positive changes as he learns and grows in this new position.

Join us in welcoming Mr. Kenneth Dewlen as the new Principal of Weiser Middle School!