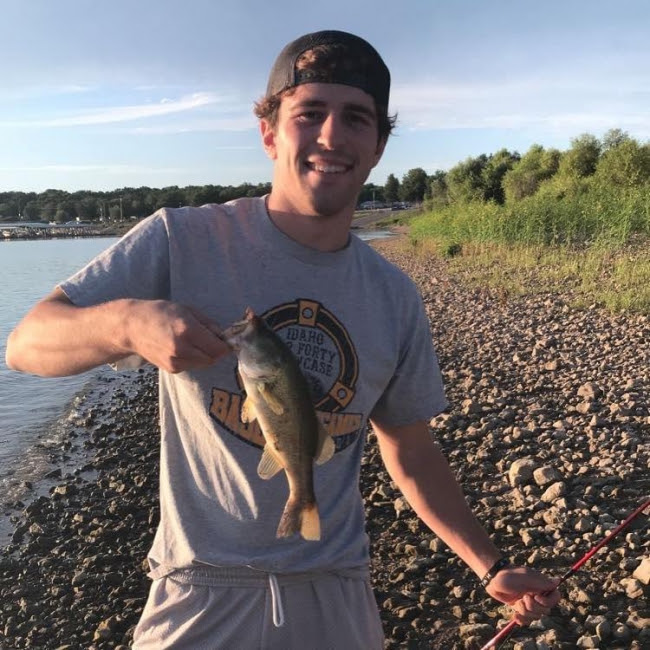 Over Labor Day weekend, on September 5th, Brody Von Brethorst was with a group of wrestling teammates at Crabtree Cove at Stockton Lake near Springfield, Missouri.  Many Weiserites will remember Brody from being active on the High School football team.  Brody and his friends were cliff jumping at a popular hangout where all the local kids go to have fun.  Jumping off a 60-foot cliff may seem outrageous to some, but this being a commonly used area for jumping, everyone felt safe and confident.

Brody explained that him and his friends had jumped the cliff numerous times that day and had decided to just hang out at the top of the cliff and have something to eat.  Lots of other kids were showing up to jump and join in the fun.  One in particular, a 17-year-old named Furious Laney, arrived to take a dip in the water and enjoy the warm day.  Brody said, “he jumped off once and everything was good.  He then came back up again, and said he was going to do a front flip.  We asked him if he was sure about doing that and he told us that he had done it before here and grew up going off of these cliffs, so we were confident that he was ok to try it.”  Despite Laney’s experience, Brody had an odd feeling about it.  He mentioned to his friend that if this kid gets hurt, he would jump in after him.

Furious Laney, known to be a great swimmer, jumped from the cliff, tumbling forward in a front flip, and landed in the water face and stomach first.  Brody says that he counted for 3 seconds and when the teen didn’t surface, he could see that people knew something was wrong.  “People started to panic.  I saw that people were jumping off boats nearby and swimming towards (him).  I realized that I did not want to watch a kid drown in front of me, so I began to run over to the rope that we used to get up the side of the cliff to jump,” recalled Brody.  He repelled down the rope so fast, he isn’t sure how he didn’t slip and fall or get hurt himself.  He quickly realized that among the older people in the water, he was likely the best swimmer.  Brody has been a part of the swim team for years, which gave him the confidence to dive into the water after Laney.

Without much time to think or make a plan, Brody asked someone on a nearby boat if they had some goggles he could use to see underwater.  “I was just trying to get down there to give it a shot and try to find the kid.  Give him a chance to live,” he recalled.  Brody dove under the water and didn’t see anything, so he came back up.  Another person on a jet ski came close and said that his depth gauge showed about 12 to 15 feet, so Brody knew he would be able to dive all the way to the bottom at that depth and have time to look around without having to come back up right away for air.  It was then that Brody saw little air bubbles coming up from the water.  He dove in that spot and swam to the bottom, looking to his right at first and saw the shadow of the boat above.  Then he turned to his left and saw Furious Laney laying face-down on the bottom of the lake.

“I grabbed him with one arm and swam him up to the top of the water.  From there people helped me get him in the boat and some people nearby began to give him mouth to mouth and CPR,” said Brody.  As luck would have it, the people aboard the boat were nurses!  As they performed lifesaving measures, the boat docked where a helicopter had flown in to take the teen to a nearby hospital.

When asked about his confidence and bravery, Brody said that being in sports and on the swim team practically his whole life helped him in this situation.  He says he has always been in really good physical shape and a strong swimmer.  Being able to focus on not breathing for longer periods of time helped him save a life.

Brody is happy to report that the teen he pulled from the water, Furious Laney, is doing very well.  “He is actually back in school and making a full recovery.  I have been in contact with his family and many of his friends through social media.  They have all been really awesome to me,” he shared.  Furious and Brody had never met before that day.  He later found out that Furious was a star running back for his high school football team in Carthage, Missouri.  “It makes me happy knowing Furious is going back to his friends and family safe and alive.  I am just grateful he is alive and doing well and making a full recovery.  I was just trying to do something that hopefully someone would have done for me if I was in Furious’ place,” said Brody.

Laney’s father, Douglas, recently posted on social media thanking Brody for his heroic act.  “You’re a special type of man, Brody.  You’ll forever be in my prayers, kid.  Thanks for saving my sons life and in the process, saving mine.  All my love to you and your family.”