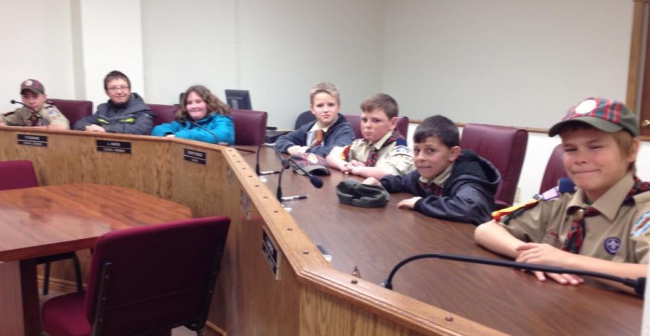 Last week, the 2nd year Webelos from pack 350 met with the Weiser City Clerk David Tate. As part of the Webelos requirements the boys are to meet with a city leader to discuss some of the issues in our community.  Mr. Tate was very helpful in teaching the boys how the City Council votes on issues and what the role of the Mayor is.

While sitting in the City Council members seats one of the boys asked if they could act out what a meeting would look like. Mr. Tate started with a scenario that got the boys attention. What if he came in with a suggestion to ban all candy from Weiser? The boys voted and the majority ruled, voting  that this was a bad idea. Then Mr. Tate told them they could amend the rule and the amendments where all over the board from the store owners giving unlimited candy to only allowing candy three times a year.

Mr. Tate then brought up another rule,  banning all cars from the City Limits. Which really got the kids to thinking, they voted and were divided and the reasons they gave were very good.  Those for the rule said it was healthier

for our bodies and our air. Those against, argued we need transportation for emergencies.

There was also a discussion about a lot of the rules that parents ask them to follow are not just their rules but rules of Law that everyone is expected to follow.

One of the boys was interested in a skate park coming back to Weiser and was told that would probably not happen. Unfortunately, certain people tried to own the park and made it uncomfortable for the majority to enjoy the facility. After the meeting we had a discussion about the skate park and how sometimes we lose good things because of a few peoples bad behavior. The boys understood this.

As Leaders  we have taken several groups of Webelos and  Boy Scouts to meet with Mr. Tate and he is very good with the boys and teaches them in a way they can understand. He always encourages them to work hard in school and follow their dreams.
Another great citizen of Weiser thank you