My Experiences In Italy, Earthquake 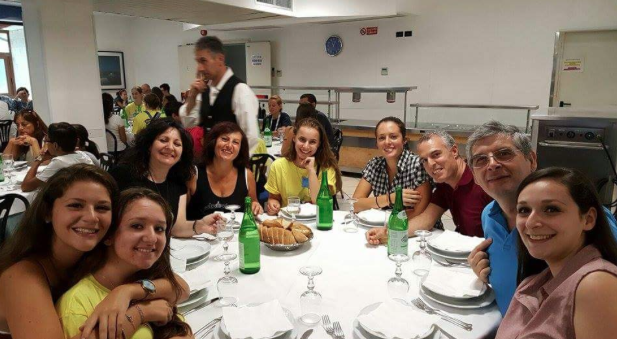 (Editor’s Note- In the first paragraph I asked Samantha to tell us about the Italy earth quakes. She is with an organization named AFS. It is an acronym for American Field Services because it used to be a traveling medical team during the war  they officially changed it to just AFS)

Italy has been a hectic area lately.  There have been many earthquakes within the last two weeks, some reaching record numbers for their size. But I am okay, Rome is one of the safest places in the country to be when an earthquake strikes, and that is where I am. The prospect of the earthquakes frightens me, and it makes me uneasy thinking of my friends who were not lucky enough to be placed in Rome. But I know that AFS Intercultural Programs will not let anything happen to their students.  I myself have only felt one of the quakes, it woke me up very early last Thursday

morning, it did not last long and I was able to go back to sleep. My host family here says that earthquakes are a normal thing, so not to worry, but I am still afraid. The news keeps tabs on the more dangerous ones, but I have not been affected by them. They are not something I am used to, living on the Idaho border your entire life doesn’t’t really give you experience with earthquakes. Nonetheless I am learning how to properly handle myself in case I happen to be away from the house during one, and I feel safe.]

Two years in the making and I am finally here. September 7, 2016 is the day my journey began. After what seemed like years on an airplane my mom and I made it to New York. It was an emotional time as we said goodbye so I could go meet

up with the representatives from AFS Intercultural Programs and start my adventure. I was checked into a hotel and put into a room with all of the other students. Students who, like me, were going abroad to study. Some for one year, some for only three months, but all excited for what was ahead. We spent the afternoon and part of the night learning things we would need to know for our time. They divided us into groups, Italy being one of the largest groups, and sent us into rooms with people who had been on the programs that we were headed into. The 8th we checked out of our rooms, did a few more workshops and a quick inauguration welcoming us into the program, and then we left for the airport.
We left NYC and flew directly to Zurich, in Switzerland, where we had a four hour layover and I learned just how expensive

fast food is in other countries. After the layover we were back on an airplane for the final two hours of our flight to ROME. We landed in Rome and went to the hotel where we were checked in and given until dinnertime to socialize and see who else was in our leaving groups. I made a few friends, mainly Americans, and spent the afternoon with them meeting new people. After dinner we had a ceremony where they explained the process in which we would be leaving with and then they wished us a good night, telling us that check out was at 9 am and not to be late. It was around this time that I broke my phone and lost ALL of my photos from NYC and Switzerland. The next day my leaving group was ushered into a room and sat in front of a crowd. It was there where we got to meet our families face to face, they called us one by one, and I sat patiently waiting to hear “Samantha Johnson, Latini family Roma est.”

The first month flew by. The first meeting with my local chapter and getting to know my friends a little better,

The first day of school where I learned that I would have other exchangers with me,
Even the first time my friends and I accidentally got lost on our way back to Italian lessons and ended up at the Pantheon

AFS required a one month camp with the other students in my area, and that was where my trip started to feel real. We stayed in a hotel in Santa Severa (  video about that trip )   and I truly learned the meaning of this trip. It isn’t to mess around and party in another county and it isn’t to spend a year sitting around missing home while you focus only on school. The reason we are all here, whether we admit it or not is for the

experience, and the friendships that come along with it. I have learned so many things about a multitude of different cultures and the differences amaze me. Stereotypes have been thrown out the window. The friends I made that weekend aren’t going to go away and I feel like that is the best thing about this trip. Not only do I get to live in Italy for a year, studying and meeting new people, but I also get a group of multicultural, wonderful friends to share the experience with.

The last thing I would like to say is Italian school is completely different than American school. The teachers decide not to show up to class and the school doesn’t’t send a substitute, you are expected to behave in your classroom unsupervised until your next block. You don’t switch classmates, only rooms and teachers. We are on a block schedule, so on days when you have three hours of math you pray your math teacher doesn’t come. Sometimes the students will form a protest and you spend the entire day sitting in whichever area that the protest is being held in. You just sit there with your friends talking the entire day.