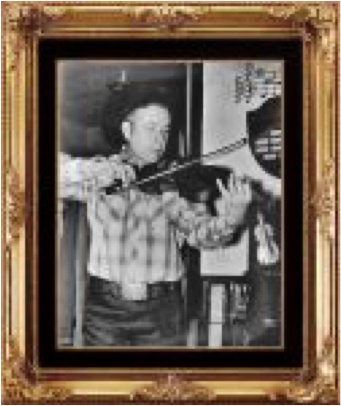 James William Widner, 91, passed peacefully into the arms of Jesus on Saturday February 27, 2016, at 7:15am in his home with his two daughters by his side. He was born October 31, 1924, in Saratoga, Wyoming, to Wesley and Zeona (Gardner) Widner. He was raised in Nyssa, Oregon and Weiser, Idaho.

He proudly served his country during WWII as a Staff Sgt. Tec 3. This is where his interest in the fiddle started. He played totally by ear and started his own band “The Snake River Outlaws” after his discharge from the Army. He married Mary Jo (Howard) Nesbitt on May 24, 1953, and they lived in Sand Point, Idaho and Missoula, MT.
In 1954 they moved to Weiser, Idaho, where all of Jim’s family lived, and he went to work for the railroad.  They moved to New Meadows, Idaho, in 1957 and then to Darby in 1965. Jim worked at the S & W/Champion Sawmill until he retired in 1987.
Jim’s interest in music was always with him. He participated in fiddle contests in Idaho and Montana, winning some but always having fun.  He won the National Oldtime Fiddlers’ Contest in 1955 and again in 1956.  In 2012 Jimmie was Grand Marshall of the National Oldtime Fiddlers’ Parade.  At that time he was the oldest living Grand Champion.  The Contest invited him to play on stage one more time. He belonged to several bands in the Darby area including The Sapphire Mountain Boys, Crazy Creek and The Western Gospel Messengers.
Jim was also a carpenter. He was always building something – llama planters, stools, tables, cupboards, unique decos, a cedar chest, etc. He also spent several years doing fiddle repair work in his “wood shop”.
Jim is survived by two daughters, Carolee Widner and Patty Burdett, a brother, Wesley Widner, and one aunt, Darlene Moeller, and one uncle, Art Gardner. There are 7 grandchildren, 12 great-grandchildren, 1 great-great grandson, 2 nieces, 2 nephews, and numerous cousins.  He was preceded in death by his wife, Mary Jo, his mother and father, and his younger brother, Melvin Widner.
Funeral services will be Saturday March 5, 2016 at Darby First Baptist Church at 2pm. Burial will be in the spring.
In lieu of flowers the family suggests donations to the Gideons International, P.O. Box 876, Hamilton, MT 59840.