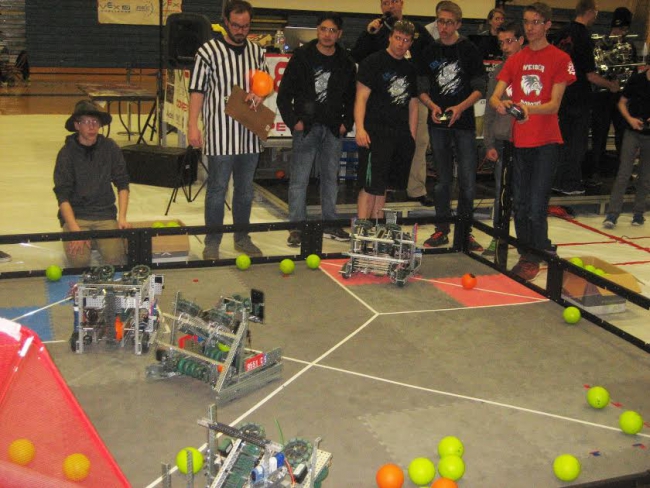 All five of WHS’s teams in the robotics program competed on Friday alongside High School and Middle School robots from across Idaho, including teams from Caldwell, Vallivue, Wood River, and Burley among others. Over 33 robots competed for the state title and a chance to travel to the World Competition hosted in Louisville, Kentucky at the end of April. Four robots won this chance; winners of the Excellence Award, an award given to the best overall team for design, sportsmanship and overall score, in both the middle and high school conferences, and the two alliance winners of the competition.

second overall and allied with the third place robot for the final elimination rounds. Team 9551A (Billy and Michael Brooke, Jonathon Shaber) placed fifth and joined a seeded four alliance. Teams 9551E (James Dworkin), 9551B (Devon Pohl, Colton Burr, Kale Poyner), and 9551D (Logon and Wyatt Towner) placed below the top ten and were eliminated in the first round.

Both 9551C and 9551A initially appeared to have a decent shot at going on to the final rounds and possibly even claiming victory; however, a seeded five alliance from Wood River pulled out a game changing ability in the quarter final rounds that ousted 9551A which seeded immediately ahead of them. They competed against 9551C and its alliance in the final round, and both teams faced technical difficulties in the final round; however, at the end 9551C fell short only a handful of points in two elimination rounds, narrowly missing out on the state title.