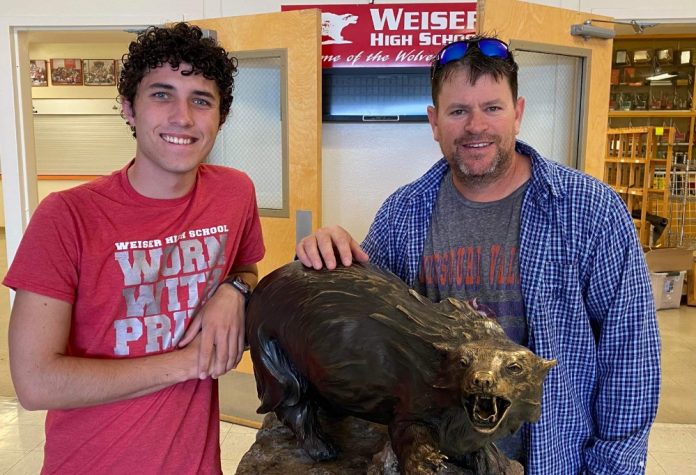 On May 17th, Kasey was driving to the local grocery store ,Ridley’s, to grab a quick bite after school. While driving down past fry foods, Kasey noticed a man lying across a ladder. At first, Kasey thought he was just reaching over but then realized it was more serious than that. Kasey had no hesitation but to help this man. Kasey pulled into Bi-Mart’s parking lot to drive over into fry foods to pull around the lying man. “Sir! Sir can you hear me?” yelled Kasey from his driver side window. The man did not respond and Kasey furthered his investigation. Now Kasey parked his vehicle and hoped out of the car to walk to the man. Kasey asked for a second time if the man could hear him and after no response and second time, he tapped his shoulder. No movement from the man was noticed. Kasey immediately called for 911. With the dispatcher on the phone he gave a description of his name, location and what he saw. Following this quick interview, Kasey then described to the dispatcher the signs he had noticed that lead to a potential stroke. Kasey checked his pulse and felt a strong beat. After telling the dispatcher the current circumstance of the man, the police arrived to the scene.

Kasey was then asked by two police officers what had happened and if he was personally working with the man. After answering their questions the police scanned the man for a phone or a wallet for identification. Soon after, the paramedics arrived and Kasey was free to leave the scene.

Kasey Kautz has been intrigued with the medical field for a good portion of his lifetime. His sophomore year of high school, Kasey took an introduction to health professions class. This class is to primarily inform those the general knowledge on professions in medicine. This class also teaches students important skills for the medical field. Kasey has additionally taken more medical classes this last school year. Specifically a medical terminology course and a emergency medical responder class. The terminally course is focused on teaching students words and terms used in the medical field. These words are also broken down to the root definition. As for the emergency medical responder class, students learn different field scenarios and how the human body works. In the field scenarios, students learn the following; signs, symptoms, scene size up, body functions, CPR, blood pressure and so much more. These classes have been taught by Mr. Von Brethorst at WHS, and have tremendously informed students on the basics to saving a life.

After graduating in the spring of 2023, Kasey would like to attend college to achieve his bachelors degree in either molecular cellular biology and biotechnology, or medical sciences. Kasey is also opened to attending a direct medical school or a P.A. school. With Kasey’s background education from WHS and his heroic heart, he will do fantastic in whatever medical direction he chooses to pursue.

From the community of Weiser, we deeply thank Kasey Kautz for his bravery and truly putting his years of education into real work!

In regards to the man rescued by Kasey Kautz, his name is Tom Keffer. Tom is married to Spring Wilson-Keffer. Spring has given the latest update on Facebook about Tom’s health. Tom currently is out of the ICU and is now in a nice, comfortable room. Thoughts a prayers are appreciated to Tom and his family during this difficult time.