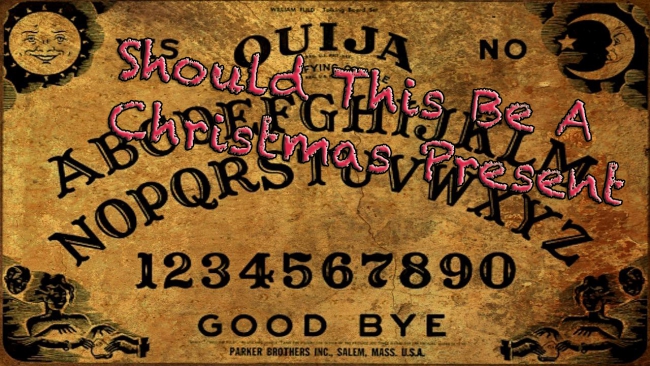 Especially this time of year, you will see many toys scattered throughout the stores. Along with all of the Candyland, chess and checker board games, you will still find the notorious Ouija board game. For many decades the Ouija board has been shrouded in controversy and still remains a hot button topic for many. Everyone has their own opinion on this subject. The name “Ouija” was a simple blend of two words “Oui” (meaning “Yes” in French)and “Ja” (meaning “Yes” in German), giving the name a mysterious overtone. In 1901, William Fuld stole the idea of this game from his boss who had created

something similar in 1890. It was first sold as an innocent board game called “The Wonderful Talking Board.” The item quickly grew in popularity, especially with self-proclaimed psychics. They would use the board game during séances in an effort to communicate with the deceased. Over the decades, the Ouija board soon developed a negative reputation for “summoning demons and wreaking havoc,” especially after the 1973 release of the movie ” The Exorcist.” The movie was based on a real demonic possession of a teenage boy in 1949. The board contains no electrical moving parts or battery operated gadgets, yet it has a pointer in which people who are participating lay their fingers on and spirits are said to move the pointer around the board to corresponding letters or words in answer to questions. Now, since these are sold in toy stores, it sends an understated message that this game is safe, harmless entertainment. In all reality, it really is

not. If not used correctly, using this board can open up a line of communication with spirits benign or negative. There is no guarantee that you will contact that one person that you wish to. My belief is that if someone is playing with the board thinking that it is merely a “game” and becomes fascinated with an activity that provides a strong element of danger and excitement, then that is an open invitation to the darker elements that may just come through. Once you open that door, there is no telling whom or what may come through. As stated before, everyone has their own opinion on this subject, but based on a personal experience I had as a teenager and numerous opinions from some of my paranormal colleagues, I strongly suggest this item not be used unless you are a highly trained professional. Enjoy your week and thank you for your time. ~Deborah Frediani-Founder/Case Manager Visions Paranormal Society